Out and About in Ashridge

I am seriously passionate about the area I live in, and feel very lucky to have been surrounded by the Chiltern Hills my whole life. Now it’s March and the days are getting longer, and the paths much less muddy, I wanted to share with you some of my favourite areas in Ashridge to go with my family. It has so much to offer and I wanted to share what I know of it – some places you’ll undoubtedly know of already, but maybe there’s some new areas for you to explore and I hope this inspires you to do just that!

The Ashridge Estate, owned by the National Trust, covers 5000 acres of stunning landscape in Hertfordshire and Buckinghamshire, and it forms part of the Chilterns Area of Outstanding Natural Beauty (AONB). I’m going to start (pretty obviously) at the Bridgewater Monument, where you will find the Ashridge National Trust information centre and shop. The monument was built in 1832 in honour of the third Duke of Bridgewater who lived in Ashridge House, and you can climb it’s 172 steps on weekends from April to October. I’ve seen all the way to London on a clear day.

There’s plenty of parking on Monument Drive here and a National Trust cafe. You’ll usually find an ice cream van around here too and often at the weekends the Juice Dub van for smoothies and coffee. There’s a small little playground of sorts – lots of logs and trees stumps to climb on for the kids and the walk around the meadow has a buggy friendly path (unless really really muddy) with plenty of chance for the children to build and explore dens. The meadow is perfect for a picnic in the summer.

There are absolutely loads of paths to explore all around here so you can have a proper adventure if you just get off the beaten track a little. If you walk down Tom’s Hill from the monument you’ll be treated to the delightful village of Aldbury (which has featured in many a TV show and film). It has a lovely couple of pubs, The Greyhound and The Valliant Trooper as well as Musette Cafe (just beyond the church), which is a cyclists dream, with great coffee and tasty snacks to fuel your walk back up the hill to the car!

From the Bridgewater Monument, if you head down Monument Drive and Prince’s Riding, you’ll find yourself at Ashridge House which was originally built as a 13th century monastery. It has a rich history including being one of the private residences of Henry VIII. It was home to Princess Elizabeth (later Queen) until 1554 before becoming a private house to the Dukes and Earls of Bridgewater form 1604 (for over 200 years). In 1808, the house was almost completely rebuilt by James Wyatt and has been home to the Ashridge Business School since 1959. I’ve was lucky enough to photograph a wedding here in 2021. You can now visit the gardens (where they often have events for children in the holidays) and they also have a cafe, The Bakehouse off the courtyard for refreshments. In between Ashridge House and the gorgeous village of Little Gaddesden (which has a little shop and the Bridgewater Arms pub) is the Golden Valley which sweeps through woodland with stunning vistas. It was a very majestic spot for some of my Autumn photo shoots last October and my kids love running down the slopes of the valley.

The changing seasons at Ashridge are obviously a delight to watch and in late April and early May one of Ashridge’s most wonderful treasures blooms with a sea of bluebells at Dockey Wood. There is a parking over the road from the wood (though limited) and the National Trust do charge a small fee (free to NT members) on the weekends to go in, which is absolutely worth spending. I promise you will not be disappointed.

If you continue from Dockey Woods along Beacon Road, you’ll come to Ivinghoe Beacon which offers spectacular views across Herts, Beds and Bucks. It is the start of the ancient tracks of the Ridgeway (described as Britain’s oldest road) and the Icknield Way. Views stretch from Pitstone Hill (you can also see Britain’s oldest windmill in Pitstone from the beacon), across to Mentmore, Dunstable Downs and Whipsnade. Although hilly, the circular walk from the car park is about 2 miles so manageable for children if you bring some snack bribes for making it to the top. There is also sometimes an ice cream van in the car park, which also makes a good reward for the whole family!

One of the closest Ashridge spots to Berkhamsted (and another favourite) is Northchurch Common – part of which is the expanse of field you see on the left as you drive towards the monument from Berko with the copse of evergreen trees in the middle. There’s a few different parking spots along the roadside and the lovely Barn Hill Farm for refreshments, which also has a play area for the kids, including a static old fashioned tractor, sand pit and some goats, pigs, rabbits and guinea pigs. Around the edge of the open common are a warren of paths for exploring – my 6 year old son as discovered a dinosaur nest, meteor crater site AND a T-Rex footprint so you really never know what you’re going to find! From June, parts of the woodland are thick with ferns and foxgloves. This area offers such variety, I love doing photo shoots here in all seasons.

Most of the photos I’ve shared here are taken with my Canon camera, but there’s also a couple on my phone as that’s often what’s easiest when I’m out with my young boys. There are plenty of opportunities for you camera phone snappers out there to get some great images of your kids in the stunning surroundings of Ashridge. Often, exploring somewhere new can give a great sense of excitement and adventure that will spark their imagination and get you some genuine happy family photos. 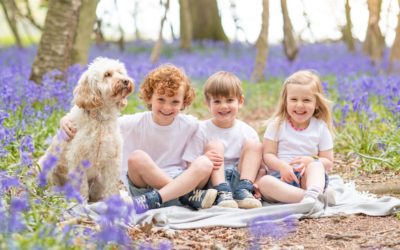 Every year I get so nervous about my bluebell sessions - will the weather hold, will my clients find my spot in the woods? But this year was another dream bluebell season and I think the flowers were their best yet! It was so wonderful to see people's reactions to the... 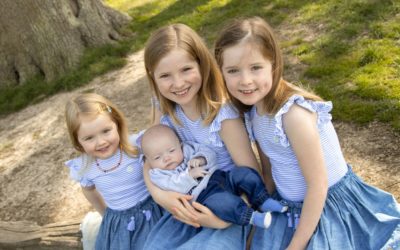 I loved this April photo shoot with these gorgeous cousins. The shoot was booked so Grandad would have some beautiful images of the grandchildren for his 70th birthday. How cute is that? I always struggle with ideas for my own Dad's birthday so this is a really clever... 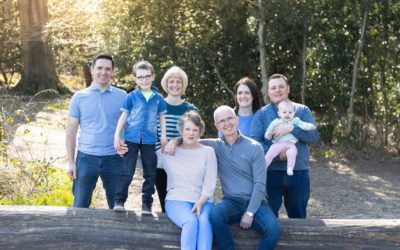 Photo shoots make a great gift and this extended family shoot from the end of March was a 70th birthday present for Grandpops! We had a glorious sunny day (remember that week of a heatwave we had? Seems like a distant memory now!) and Ashridge was the perfect location...